Over the past three weeks, countless volunteers from around the country have banded together to Sound the Alarm on home fire safety. 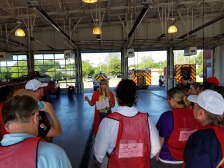 This lifesaving initiative is part of the Red Cross Home Fire Campaign aimed at decreasing the number of deaths and injuries attributed to home fires. Launched 2014, this program has already saved more than 400 lives; three of them here in North Texas.

While the Sound the Alarm campaign ends on May 13, installing smoke alarms and providing home fire safety education is an ongoing part of the Red Cross mission. Few know this better than Wichita Falls, TX volunteers Michael and Sharon Dow.

The Dows began volunteering with the Red Cross in 2005, helping with disasters of all sizes, including Hurricane Katrina and multiple single family fires. They were also part of the local team that initiated the Home Fire Campaign in the Big Country chapter. Determined to make Wichita Falls and the surrounding communities safer, Michael and Sharon looked for high-risk communities in need of Red Cross support.

Prior to becoming volunteers, Michael served in the U.S. Air Force and Sharon worked in the Red Cross Service to the Armed Forces department. Both have a heart for serving others, and joining their local Red Cross Disaster Action Team (DAT) provided an opportunity to help people before, during and after disasters.

As part of the Red Cross DAT, the Dows have responded to multiple home fires; nationwide, the Red Cross responds to a home fire every 8 minutes. Firefighters contact the Red Cross and the Dows drive to the impacted house to provide assistance with housing, medications, food, water, and financial relief to meet the family’s immediate needs.

After years of responding to these fires and witnessing the devastation first-hand, the Dows were excited when the Home Fire Campaign launched in 2014, giving them the perfect opportunity to help prevent others from experiencing an often preventable disaster.

“Smoke alarms are important,” expressed Sharon, “this small act of going to someone’s house, taking a few minutes to install a smoke alarm and educating people on home fire safety is the least we can do to help.”

“It doesn’t matter if it’s a really run down house or a huge expensive one, a lot of people do not have smoke alarms and really need (them),” said Michael.

Having assisted hundreds of familes, the Dows have worked out a system where Michael installs the smoke alarms while Sharon provides the fire safety education.

“It’s something we enjoy doing,” exclaimed Sharon. “It’s fun getting to know new people and then leaving knowing they’re protected. It makes a person feel good.”

The Dows show no signs of slowing down anytime soon. They are currently compiling a list of residents in need of free smoke alarms and fire safety education.

The Red Cross appreciates the Dows, and all our volunteers, who have helped over the past three weeks and throughout the year to Sound the Alarm. Save a Life.

To learn more about the Red Cross Home Fire Campaign, Sound the Alarm, or for resources to make your home safer, visit redcross.org/firesafety.

If someone in your home has the flu, designate a sick room and clean it daily. Wash the sick person’s laundry with normal laundry soap and dry on a hot setting. Keep dirty laundry away from your face and body. Wash your hands right after touching dirty laundry.