The Generosity of Grace

As volunteers with the American Red Cross Spiritual Care Team, they’re in Dallas helping people deal with the aftermath of Hurricane Harvey on an emotional and spiritual level. 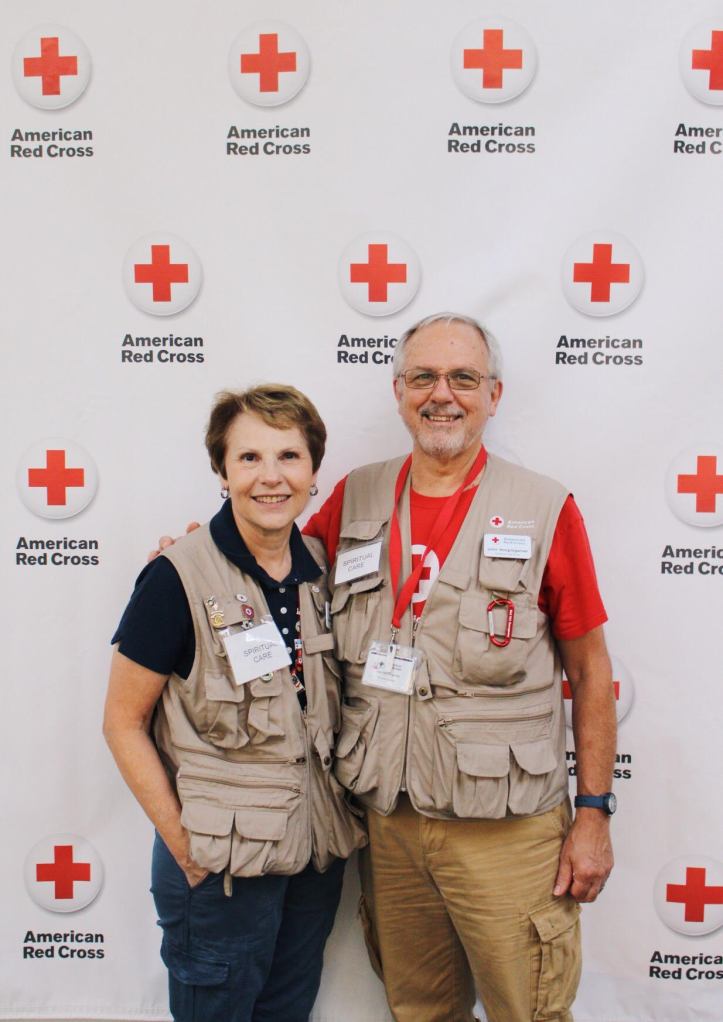 Jane explains that they both understand their faith might differ from those they work with, but they’re able to connect with others through core values and can guide people to the faith-based organizations of their choice.

There is no “typical day” they say, but here’s how last Saturday went for them. Their first stop was at one of the Dallas shelters. This shelter was closing and transferring the residents to a different shelter, so the couple were there to offer support in any way needed. They helped residents pack, cleaned and broke down cots, and offered support to those who seemed troubled. After spending a few hours at the first shelter, John and Jane headed over to a second Dallas shelter. This shelter was where clients were being received and was much livelier. There were several organizations catering lunch for both residents and volunteers, clients from the first shelter were moving in, children were playing outside with sidewalk chalk and hula-hoops, and an array of volunteers assisted in any way they could.

It was a little hectic at first, but then the couple fell right in step, helping to move in residents from the other shelter, helping unpack their cars and arrange their sleeping quarters.

As the day went on, Jane met a man who had lost his job and was living in the shelter with his two children. “He lost his job and talked to some people and found out about the shelter,” she explained. “He really needs a place to stay with his kids, so I’m going to talk with the shelter manager to see if we can get him connected with some local services.

Soon Jane was able to recommend some local social service resources to help him improve his situation.

As John and Jane took a moment to have some lunch, another situation emerged.

“There is a lady who had us call the EMS because she needs to go to the hospital,” reported a volunteer, “but she won’t go in the ambulance because her mom died in one a week ago.”

The shelter manager stepped into action and John was not far behind. He helped talk the young woman into going to the hospital for her hernia, which had gone untreated and was in dire need of medical intervention.  “She would only go if someone would drive her in her car,” John explained.

While John was at the hospital, Jane visited with Amy (name changed to protect her privacy) who was exhausted from the past week’s events. Amy had come from Freeport to stay with relatives before the hurricane hit and was running out of money and food. The shelter was her last hope. “I just tried to do it on my own,” Amy explained as tears filled her eyes. “I’ve just always been independent, so it’s really hard for me to ask for help…but I ran out of food and I’m almost out of money.”

As Amy told of her journey, Jane spoke words of encouragement. “You’re in the right place,” she said. “Everyone has their time to give and their time to receive.”

Amy described her home on stilts, with the water halfway up the first floor. She wanted to get back home, but knew it wasn’t possible.  “I heard a song on the radio on my way over here, and I felt like God was talking to me through that song, telling me everything is going to be okay.” She said.

With a smile, Jane responded, “Your faith is what will get you through these hard times.”

As the two continued to talk, Amy’s demeanor shifted from helplessness to hopefulness. Jane helped Amy pick out clean clothes from the donation area and get what was needed for a shower.  Jane showed her where she could talk with FEMA representatives and wished her well.

The day was coming to an end and there was one last stop: the Kay Bailey Hutchinson Convention Center, where more than 1,800 evacuees were residing. There, a few members from the Spiritual Care Team met to finalize the Sunday church service. They had worked with leaders from different denominations to create a non-denominational church service designed to give hope to all who attended. 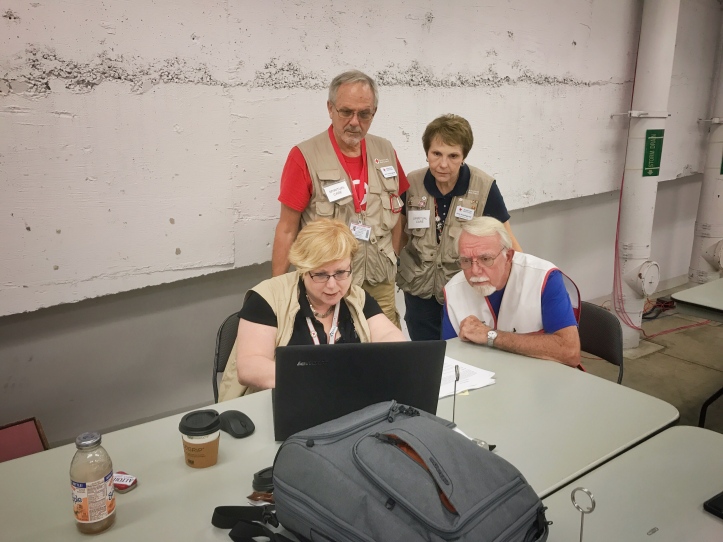 John and Jane are part of a larger team which plays an instrumental role in the healing and recovery process for victims of disasters. They believe that it’s paramount that each individual have a chance to rebuild from the inside out and that begins with both mental and spiritual growth. Currently, the Red Cross has spiritual care teams deployed nationally and internationally, assisting victims of all types of disasters.

While the Hoopingarners have served with the Red Cross for the past five years and been a part of 14 disaster response operations, this is their first time as spiritual care volunteers.

“We’ve done mobile feeding trucks, shelter surveys, and helped install fire alarms,” explained John. “Jane has interned with case workers and mental health care to help with families who have lost loved ones. Anywhere we volunteer is our sweet spot,” John said with a smile, “Where the Red Cross needs us, we enjoy it!”

Throughout their marriage, the couple has always been active in their church and after realizing the need for spiritual care volunteers, the pair decided to pursue the training to become part of the Spiritual Care Team.

If you or someone you know would like to serve in a spiritual capacity, call your local chapter to find out more information, or visit www.redcross.org.