Face to Face: Southern Baptist Disaster Relief works with the American Red Cross to help those in need

For the Southern Baptist Disaster Relief kitchen team, showing up at a disaster to provide food for the American Red Cross to feed those in need is nothing new.

“Most times, all we see are Red Cross volunteers,” said Ray, of Gainesville, Texas, who heads the 45-member crew that cooks two meals, every day, for the shelter residents. “The Red Cross buys the food, we cook it, and you guys load it up and take it to the people.”

Each kitchen unit includes tilt kettles, convection ovens and all the kitchen implements needed to turn out hot, hearty meals. A disaster relief kitchen unit can be set up in a few hours and produce up to 20,000 meals a day.

But their routine was a little different when Hurricane Harvey struck Houston. The Baptist kitchen crew arrived at the George R. Brown Convention Center to provide meals for the Red Cross, which was operating the shelter at the center. Only this time, the Baptists both cooked and served the shelter meals, coming face to face with those who’d escaped the ravages of Harvey.

Shelter residents at the George R. Brown Convention Center in Houston line up for lunch cooked by a Southern Baptist Disaster Relief kitchen crew and served by American Red Cross volunteers. The two organizations have been partners for more than a half century in providing food in disasters. (Red Cross photo by Carl Manning)

“It’s bringing our people to tears. There are a lot of broken people here and for those of us who have been blessed, it’s very emotional and it pulls at you,” Ray Gann said, as he double-checked a menu that included roast beef, mashed potatoes, and peas.

For Ray and his team, it was a moving experience to connect with those who had lost their homes. Many showed up at the shelter in driving rain with no more than the wet clothes on their backs and their possessions in plastic trash bags.

It’s now a common sight to see the kitchen crew, sporting their signature yellow shirts, mingling in the shelter area and visiting with residents area once they’ve finish their shift of mixing, stirring and cooking.

Other Baptists kitchens are operating throughout the storm-ravaged areas of Texas, providing the ready-to-eat meals the Red Cross delivers via its fleet of 200+ Emergency Response Vehicles in the state. 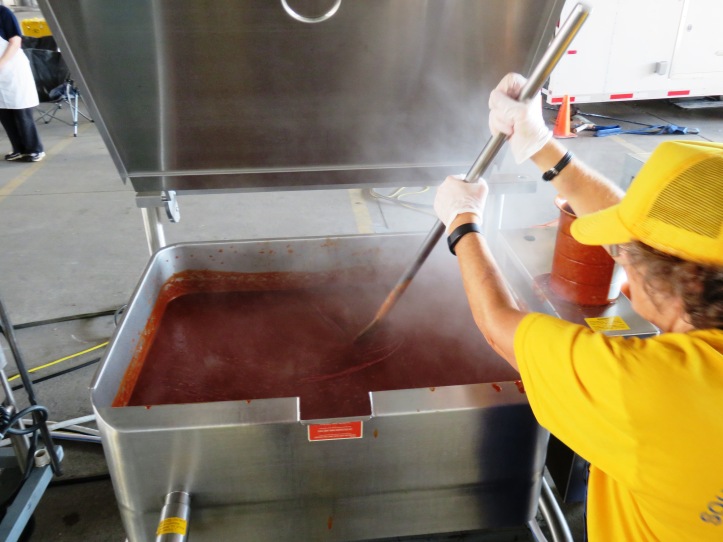 David Odom, of Wichita Falls, Texas, is a member of the kitchen crew whose day ranges from unloading trucks to whipping buckets of mashed potatoes. His reason for doing what he does is simple.

“I’m commanded to serve mankind and when mankind has a need, I’m there to serve,” he said. “It gives me a completion in life to do this.”