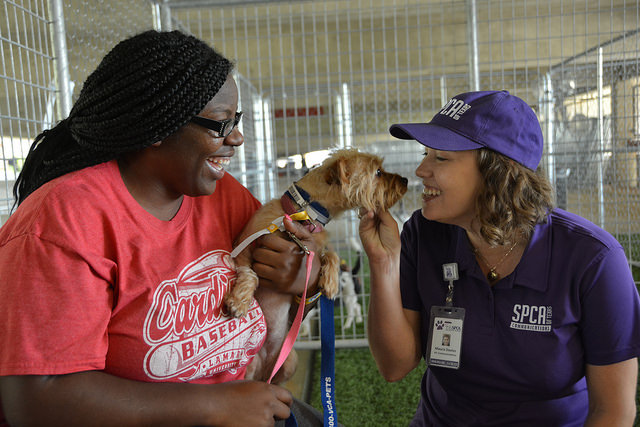 Inside an old parking garage, less than a mile from the Red Cross shelter at Kay Bailey Hutchinson Convention Center where 2,400 Hurricane Harvey evacuees are currently staying, a scruffy Yorkshire Terrier named Summer is jumping up and down like popcorn. Because her mom is here to see her.

Summer’s mom is Keosha Lyons, who was evacuated along with her mom, sister and Summer from Port Arthur on Tuesday.

“I could barely carry her in the water. When we got in the rescue boat, I thought I was going to lose her,” Keosha recalls. “It’s okay. It’s all fine now. But in the moment, it was scary.”

Keosha and her family arrived at the Red Cross shelter in Dallas and Summer was taken to a nearby temporary animal shelter being run by Red Cross partners, the SPCA of Texas, where she could be safely cared for while her owners are staying at the convention center. The SPCA shelter is currently housing nearly 70 animals—mostly dogs, a few cats and three birds, all belonging to residents of the Red Cross shelter next door.

Every day, there are visits from the owners to their furry friends, which are all eagerly anticipated. 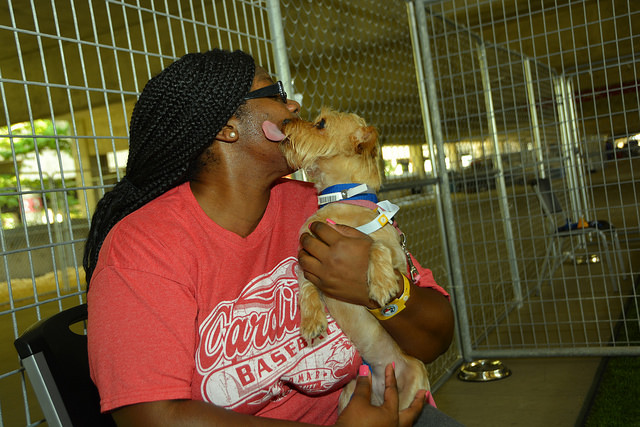 “You can always tell which dog’s owner has come to visit,” say Maura Davies of SPCA. “Because all the other dogs are just laying there, and there’s one just jumping up and down like popcorn because they’re so excited.”

The visits are good for both owner and pet, who have both been through traumatic experiences. Some evacuees described dramatic rescues by boat or even airlift, with their pets in tow. One resident, visiting his chihuahua, had to carry his terrified dog while wading through four feet of water to get to a rescue boat.

When they arrive at the shelter, the animals are checked by veterinarians and given vaccines and microchips if needed. They are also watched carefully by animal behaviorists to make sure they are doing okay after their ordeal. Most are, but a few need attention.

“It’s a different situation for them. It feels different, it looks different and some of these animals have been through traumatic situations and then had to be transported by bus or airplane to get here,” Maura explained. “So we make sure they are okay and we have several different areas where owners can visit and play with them.”

Partners like SPCA are critical to the relief effort after a major disaster like Harvey, because regular shelters usually cannot house pets as shelter residents may have pet allergies, asthma or other health issues, or just have a fear of animals. Therefore the Red Cross relies on partners like SPCA of Texas to help make sure pets have a safe place to stay. In Dallas, thankfully, the closeness of the shelters allow for frequent visits.

So more dogs jumping like popcorn are sure to come.

Keosha and Summer are all smiles!

Join us on Jan 26 for a 45 minute presentation to achieve a general understanding of International Humanitarian Law, including the laws and rules that apply to armed conflict, the 4 fundamental principles and their protection. To register, click here: rdcrss.org/3FojTss