Our U.S. military selflessly protects our country and risks their lives everyday. While we all know what our Armed Forces do for our country, we don’t often think about the many sacrifices their families make to support the brave men and women that serve.

Gigi Winburn works as the Regional Program Manager for the American Red Cross Service to the Armed Forces/International Services of North Texas, but she is also a mother to someone who serves in the U.S. military. Her son, Paul Harden, is currently stationed at Ft. Bliss in El Paso, Texas as a Radiology Technician.

Paul went into active service the summer of 2014

after graduating from high school.  “[He’s] ridiculously smart, so school was very hard for him since he was ahead of everyone,” said Winburn. “After looking at his options, he thought the military would be the best fit for him so he could get training and do an actual job without just sitting in a classroom.”

After doing his Basic and Advanced Individual Training (AIT) in Ft. Sam Houston as well as Ft. Hood, Paul’s first duty station was in his hometown of El Paso, Texas at Ft. Bliss. “[Paul] was ecstatic to return home,” said Winburn.

Gigi and her family witnessed the work American Red Cross does with the Armed Forces firsthand. Back in 2015, Gigi’s family received the news that her father’s cancer had worsened and he didn’t have much longer to live. At the time the news broke, Paul was in phase two of AIT and was hard to contact. “[My father] was very much a father figure to [Paul],” said Winburn. “I was very worried about Paul seeing him before he passed.” 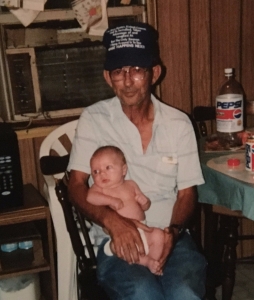 After receiving the news, Gigi hopped in the car to drive from St. Louis to Georgia to see her father. She recalls that she contacted American Red Cross once she hit Tennessee’s state line to request an emergency communication for Paul. Once she had exited Tennessee, American Red Cross had already booked Paul’s ticket for the first flight out of Texas the next day. “It was amazing to have that support and see how hard [American Red Cross] worked to make sure we were taken care on,” said Winburn.

Gigi and Paul were able to spend the day with her father before he was moved into hospice. Later that night, her father passed as Paul was holding his hand. The next day, American Red Cross followed up to ensure that Paul had gotten to his destination safely and to pass on best wishes to the family.

After this experience with American Red Cross’ Service to the Armed Forces team, Gigi was impressed with the work they did and was eager to join the team. She had experience serving on the Disaster Relief team, but the “caring shown solidified her decision to look into SAF.” She applied for her current position in March 2016 and was shortly thereafter offered the job. Gigi now spends her days overseeing the SAF specialists and overseeing the North Texas program.

Despite her commitment to American Red Cross, her

most important role is serving as mother to her children. “I have so much pride in my son and his decision to serve,” said Winburn. “He is a part of the 1% of the population that takes the oath and signs the blank check.”

If you’re interested in donating to or volunteering with the Services to the Armed Forces program, please click here.

Rhonda made it a point to take the time to donate blood after stopping by a @ymcadallas for her regular workout. Donating blood was on her to-do list, and she couldn’t beat the convenience.