Dallas County Commissioner Dr. Theresa Daniel had the wrong footwear for the day’s activities. The sidewalks were uneven in the south Dallas neighborhood where Red Cross volunteers were canvassing with tornado safety information on January 9, and she was, as she is usually is, in heels. Nevertheless, Dr. Daniel was in a cheerful mood as she stepped blithely into the street to avoid a particularly cracked stretch of sidewalk.

“People have been very positive, very welcoming,” she said about the residents in the area.

Around 60 American Red Cross volunteers hit the streets in neighborhoods around south Dallas and Glenn Heights to talk to residents about how to stay safe in the event of another tornado outbreak like the one that hit the Metroplex the day after Christmas. Dr. Daniel, a former case work supervisor with the Red Cross before she became commissioner, decided to join the effort after seeing the call for volunteers. 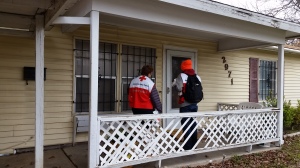 “I’ve always been very much aware of the importance of emergency preparedness, even from having an escape route at work for fires. It’s my responsibility as commissioner to keep our community safe,” she said. “When I saw the note come out about this event, I thought, what better way to be able to go talk to people in the community?”

She also saw it as an opportunity to learn more about what the Red Cross is doing to respond to the disaster and prepare residents. She was especially impressed by the Red Cross’ mobile preparedness apps.

“I didn’t know about the app, and I think that’s really cool. Being able to see if your family is safe is such a good idea. Anything we can do to use technology to keep us safe is great,” she said, adding that residents she’s talked to about the app were also appreciative of the tool.

Dr. Daniel also had the opportunity to visit the Garland neighborhoods most hard hit during the December storm and was inspired by what she saw.

“I saw the high school where the shelter was. I saw all the things people donated and all the volunteers. It was very inspiring to hear them talk about their community,” she said. “I went in the neighborhoods and saw all the damage. I’ll never forget it.”

Which is why she was present, heels and all, completing her route in the cold on a Saturday afternoon in January.

“I want to do whatever I can do to help,” she said as she headed toward another house.

If someone in your home has the flu, designate a sick room and clean it daily. Wash the sick person’s laundry with normal laundry soap and dry on a hot setting. Keep dirty laundry away from your face and body. Wash your hands right after touching dirty laundry.