We all know the American Red Cross is one of the first responders after a disaster. However, at the heart of the Red Cross’ mission is to prevent and alleviate human suffering…many who serve the Red Cross tirelessly live that mission not only on gray sky days, but on blue sky days, as well. One of those we honor is Louisiana (Lula) Owl Gloyne.

Lula Owl was born in 1891 in the Qualla Boundary, a mountainous region of southwestern North Carolina and home of the Eastern Band of Cherokee Indians (EBCI). The EBCI and their descendents were the few hundred Cherokee Indians who either escaped from or evaded removal and returned to the original home of the Cherokee Indians. Lula’s mother was Catawba Indian and her father was Cherokee. Her parents did not speak each other’s language; however, both spoke English, which greatly improved Lula’s chances of professional success.

Lula was raised Southern Baptist, but the Cherokee are strong believers in tradition. Naming their children after certain spirits is heralded as one of the Native American tribe’s traditional ways of life. Lula’s mother must have had insight to her daughter’s future. The owl spirit, as some Cherokee shamans believe, aids the sick.

When Lula was young, the federal government established boarding schools for Native Americans, forcing them to assimilate into white culture. It is one such school that Lula attended. After finishing there, Lula went on to the Hampton Normal and Agriculture Institute, now Hampton University, to begin a life of many “firsts.” The Hampton Institute was the first African American college in the South after the Civil War. At the time Lula was accepted, it was the first time the school “experimented” with biracial education—accepting nearly 1,000 Native Americans into its program.

Lula graduated the Hampton Institute, where she studied education, which was common then to teach graduates how to teach, in 1914. For one year, she taught school before it was arranged for her to attend the Chestnut Hill Hospital School of Nursing in Philadelphia. Two years later, she graduated and was awarded a gold medal in Obstetrical nursing. She was the first registered nurse from the Eastern Band of Cherokee Indians. And quite possibly the first Native American registered nurse in history.

With her credentials, she was given a position at the St. Elizabeth Episcopal School located in South Dakota on the Sioux Reservation. There she was embraced by the community, much like she was in Philadelphia and initiated immunization clinics, helped deliver babies and tended to the elderly in their homes, as well as perform all her duties as the school’s nurse.

The Red Cross’ relationship with nurses is a tight and collaborative one today as it was then. Lula was on the list of the Red Cross’ reserve nurses and when America joined WWI, Lula enlisted to serve. She was stationed at Camp Lewis where she became 2nd Lieutenant with the Army Medical Corps. She was not only the only EBCI woman officer; she was the only member of the Eastern Band of Cherokee Indians that was an officer during WWI. 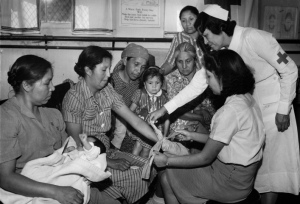 While serving at Camp Lewis, Lula rekindled a relationship with a lower-ranked soldier, Jack Gloyne. They secretly wed in 1918.

In 1921, after spending time with a sick family member in Oklahoma, Lula returned home with her husband to the Qualla Boundary. Her community had no electricity, no sewer services, no running water or paved roads. She was the first and only health care provider there. Prior to her return, there was only one clinic and one doctor, but in Cherokee, North Carolina—no easily accessible for those living in Qualla Boundary. A doctor familiar with Lula and the area noted that Lula convinced many Eastern Band Cherokees to accept care that may not have received it from any other provider. Throughout the 20s, Lula worked for the U.S. Indian Health Service making house calls and delivering babies in the Qualla Boundary, many times walking long distances and pushing a cart until the government purchased her a car.

During this time, Lula had four children of her own. Sadly, John passed away before their youngest child was two years old. After his passing, Lula moved the family to Miami, OK to work at the Wyandotte Indian School in Clinic.

In 1934, Lula had the honor of traveling to Washington D.C. to present to Congress the need for a hospital in the Qualla Boundary. Because of Lula’s efforts, the first hospital was founded there, with Lula serving as head nurse. Not long after, Lula was in a very serious ambulance accident and left Oklahoma to return home to North Carolina to recuperate.

After healing, she continued her work as a nurse in many different places until she retired in 1969. At 79, Lula took up bowling.

Lula Owl passed away in April of 1985 at 93 years old, and she left a legacy. Not only did she inspire many other Native women to go into nursing, but one of her daughters, Mollie Blankenship, was the first woman to be voted onto the Cherokee Tribal Council. One of her grandsons is a treasured and award-winning Cherokee story teller. In 1985, Lula was nominated for “Distinguished Woman of North Carolina”, and in October, 2015, she was inducted into the North Carolina Nurses Association.

One of Lula’s greatest achievements was being named “Beloved Woman” by the Cherokee Tribe. She is one of only three women to ever hold the title.

This Native American Heritage Month, the Red Cross celebrates individuals like Lula and partnerships with tribes like the Cherokee that were valued in our past and are integral to our present and future.

Last week we were able to celebrate some of our brave men and women during National Salute to Veterans Week. It’s always an honor to show our appreciation to our country’s heroes for the sacrifices they’ve made. #ThankYou #Veterans #Military