Closing a Chapter of My Red Cross Story

A few years ago when I first moved back to Dallas, I made a New Year’s resolution to start volunteering again. I didn’t know it then, but this was the start of my Red Cross story.

We often ask volunteers or people we meet, what’s your Red Cross story? Almost everybody has one. They were helped after a home fire or they took a CPR class or they’ve given blood. The truth is, before I started volunteering with the Red Cross, I didn’t actually have a Red Cross story. Furthermore, I had, it turned out, very little idea of everything the Red Cross actually does.

In my first year as a volunteer writer for the Red Cross, I interviewed: a caseworker for our Restoring Family Links program who recently reconnected a man with his sister who he hadn’t spoken to in 30 years; one of our disaster mental health counselors who has been helping people affected by disasters cope since Hurricane Katrina; and three young people who saved the life of a man at their church with CPR skills they learned from the Red Cross.

By the time I was offered a full-time position as a Digital Communications Manager for the North Texas Region, I felt like I had learned all about the Red Cross and its services. Of course, I was wrong. In fact, I found over the course of my three years here that I never stopped learning about new ways we try to help in the community.

A major project I was brought in to work on was the launch of our North Texas Digital Operations Center, a social media command center which allowed us to exponentially increase our social response during disasters, helping people connect with the resources they need and pulling critical situation awareness information from social conversations that can actually help speed up our decision-making and in turn, our service delivery during emergency situations.

Now, nearly two years after our opening, we have a team of more than 20 digital volunteers ready to help make our communities safer, even in their pajamas at home. But back during the Granbury/Cleburne tornado outbreak in 2013, one of my very first disasters, it was mostly just me. Trying to tweet from my underground parking garage as tornado sirens sounded in Dallas County, I realized just how crazy this job could be. And how impactful it is.

Earlier this year, we started working on what turned out to be a two-month-long disaster response that began with an EF-3 tornado in Van, Texas and continued with what seemed like endless flooding throughout the state. Very late on one of our earliest nights on the operation, we got this tweet: 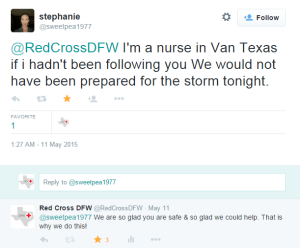 It is a rare gift to get to know that your work can make this much of a difference. Of everything I got to do at Red Cross, this is what will stay with me the most.

In my time at the Red Cross, I went to West, Texas to respond to a fertilizer plant explosion, walked in debris fields in Granbury and worked an entire ice storm response where we opened 11 shelters in four days from my couch, because the roads were not even safe enough to get to the chapter. I met Red Crossers from all over the country and with all sorts of backgrounds and different journeys for how they wound up serving. I continuously looked for new and interesting ways to tell the Red Cross story. I eventually learned what DAT, SAF, DST, IS and PHSS actually stood for.

Today is my last day as an employee at the American Red Cross. I’m moving on to a new adventure, but fittingly, this chapter of my Red Cross story closes the way it opened. I am going back to being a volunteer, just like 97% of my fellow Red Crossers.

I feel honored to have served and worn a Red Cross pin. Most of all, I am humbled to have worked with so many amazing teammates – in Dallas, across North Texas and around the country. Thank you. It’s been a privilege.

Soak up all this beautfiul weather we're having here in the North Texas region and find some time to unwind and take a breather.