Yes, it is in fact actually July, already!

The realization has been uttered numerous times throughout the Dallas and Fort Worth chapters since the first of the month arrived on a Wednesday. As of late April and early May, a majority of paid staff and volunteers have been on a Disaster Relief Operation (D.R.O).

We’re not even sure it’s really ended, but nobody wants to jinx it and ask.

I’m happy to announce not a single soul on the D.R.O forgot to pay rent or utility bills for the past two months!

The sounds of clacking keyboards, zillions (yes zillions) of separate conversations and shuffling feet filled the second floor of the Dallas Chapter Red Cross building. Hundreds of people responded to the call to action.

As the dust has began to settle, we now know what we want for the next D.R.O. I mean, if we got the luxury of choosing, this is what we would include:

More Cowbell? Nah, we would like to request Norma’s Cafe in Dallas to keep a stock of pie strictly for our need of sugar during chaos. Will you deliver, Norma? Please say yes!

Walmart, think we can borrow a few of these for next year? We’d all really appreciate a feasible way to get home the next time Mother Nature is feeling extra salty. “Drought? Ha, what drought!”

The Digital Operations Center powered by Dell is kept in a building harboring arctic temperatures. This means we could all become Elsa and build a snowman. We propose a Snuggie with Red Cross branding to keep us warm and cozy. 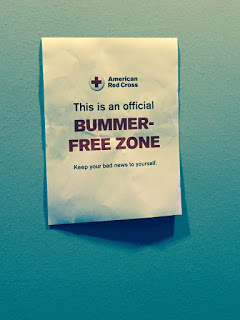 Humor fixes the saddest frowns, and we never lost our jokes. I challenge the next D.R.O. crew to be just as hilarious as the last!

Southwest Airlines, your pretzel and peanut packets were life-saving. We’re of course going to need more of these heavenly treats for the next go-around … but not for another year or two, hopefully.

Panera, you sweet, sweet delicious friend of ours. The coffee, sandwiches and treats we ate every Friday were magnificent. In the next D.R.O we will need copious amounts of your coffee, stat!

The snacking never stopped after the D.R.O. ended, but for everyone’s hips sake, we are really going to need a lot more fruit and veggies. Okay-okay, this is only going on the wish list to make our conscious feel less guilty. Never-the-less, Dallas Farmer’s Market anyone, Bueller? Bueller?

YES! This would’ve been perfect when staff and volunteers were too busy and/or sleep deprived to talk. Had I purchased this bad boy, I could’ve just used it to gauge everyone’s mood that day. Nothing says leave me alone like a blue stamp in the middle of your forehead!

Now I know corporate probably, most likely, wouldn’t approve. Could you imagine almost 100 people stopping what they were doing and for 5-10 minutes get into a NERF war? Amazon, make it happen.