The Soul of a City: An Account from West, Texas 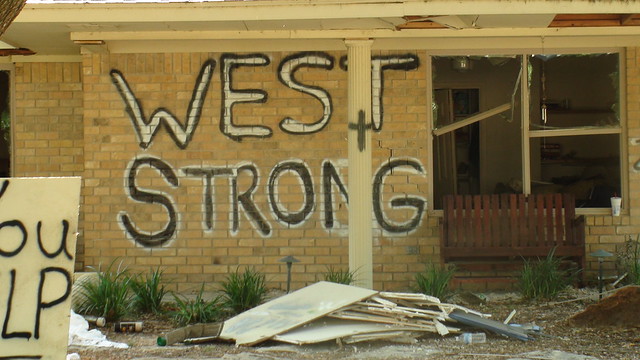 As a Red Cross worker often on the front lines of major disasters, people ask me all the time how I can drop everything—friends, family, my local job—and race to a disaster scene. It’s not a hard question to answer because I know that our call to action means that families need our help. On April 17, the call came to head to West, Texas after a fertilizer plant exploded. What no one has ever asked me is though, is how I can leave a disaster scene a couple of weeks later while people are still suffering.

As I wrap up my fourteenth and final day on the assignment in this Czech community we have come to affectionately call West “Comma” Texas, I am weepy. I weep for a city that will never be the same; for 15 families who, 14 days later, are still laying their loved ones to rest. I weep for the emergency response community who lost 12 firefighters in one fell swoop, two of them brothers.

West lost seven of their heroes. Two more died from a neighboring small town called Abbott, two civilians were honored as firefighters because they jumped in to help put out the fire and one loss was from the area I serve every day in Dallas, Texas.

Words cannot describe the enormity of the grief that these towns are experiencing.

Through my tears though, I’m also comforted by the kindness of this community and the sheer determination, dignity and fragility they have exhibited in the face of this unspeakable tragedy. I have learned a great deal about the soul of a city in the past two weeks and I have to say that West, Texas has a beautiful soul.

The mayor’s home was destroyed, but he rallied his town to begin their recovery. The city secretary, responsible for getting important information to the town through their website, was also a volunteer firefighter and died in the explosion. In spite of this, the city found a way to keep information flowing to their residents. Mark Felton with the Red Cross in Waco has coordinated our services every day, around the clock. The county judge, city council members, heads of business and many others are present in the town every day taking care of their residents. And the residents are taking care of each other.

I love it when my phone rings off the hook after something like this because I know people are calling to find out how to best help the people suffering. And help for West came by the masses. I knew early on that the community would have their physical needs taken care of, but I did worry about how they would cope with the trauma.

So many times, we focus on the death toll—how many died in this or that disaster, but we don’t as seriously consider the number of lives that are forever changed when one third of a town is destroyed. There were more than 200 people transported to area hospitals, many still there with grave injuries requiring long-term care and rehabilitation. Others will have the images of the explosion and the gruesome aftermath in their minds for years. Everyone will grieve the loss of so many of their friends and neighbors. It’s overwhelming to think about. But with a new understanding of this place at Exit 353 off of Interstate 35, I am comforted that the people of West, Texas, will take care of their friends and neighbors for as long as it takes. That’s the soul of this city.

As I prepare to leave West “Comma” Texas, I say this to the community: It is hard to leave because I know I’m leaving a piece of my soul behind. But I won’t be gone forever. The next time I’m making my way south down I-35, I’ll take Exit 353 and hang a left to the best kolaches in the entire world, followed by the Poopsie at the Czech pizza place. I’ll ask how the recovery is coming and how your people are healing, physically and emotionally. I’ll tell you every time what an honor it was to be here to serve with the Red Cross and with my best Czech accent, I’ll say dekuji (“thanks”) for showing me your soul.

Rhonda made it a point to take the time to donate blood after stopping by a @ymcadallas for her regular workout. Donating blood was on her to-do list, and she couldn’t beat the convenience.